Veil gets lifted on the cell cycle

The cell cycle has not delivered its whole secret yet. The team of Philippe Roux, in collaboration with the teams of Sébastien Carréno and Michel Bouvier from IRIC, have recently published a study revealing a new mechanism for the regulation of this process. Indeed, to pursue its progression into the phase called “mitosis”, the cell cycle needs a green light. This one is given by the RNA-binding proteins, NF45 and NF90, that allow mRNA expression of genes that are essential for mitosis.

To duplicate its genetic material, the cell follows its life cycle called cell cycle. This one is broken down into different phases, the ultimate phase of which corresponds to cell division or mitosis. In order to ensure the proper functioning of the cycle, different sentinel-like genes are posted at each of these phases and may or may not allow the cycle to go on its way.

These cell cycle control genes can themselves be modulated at the level of their RNA by proteins that interact with them, termed RNA-binding proteins. These proteins play a crucial role because their binding can lead to changes in the expression or localization of the cell cycle genes.

By looking at this group of proteins, the researchers identified the RNA-binding proteins, NF45 and NF90, as major regulators of the cell cycle. Indeed, these proteins are essential for the expression of a group of genes, which are themselves necessary for the progression of mitosis. Furthermore, the study highlights that this regulation takes place at the mRNA level, and involves a competition between the NF45 and NF90 proteins with another RNA-binding protein, Stau2. The latter is responsible for the degradation of mRNAs that do not respond to “quality control”. If the NF45 and NF90 succeed in binding to the mRNA cluster in its place, these mRNAs are stabilized and the cell cycle can resume.

The results of this research have recently been published in the journal Cell Reports. This major advance unveils the regulation of cell cycle genes at the mRNA level, of which little is known to date.

In addition, it provides preliminary explanation for the observed overexpression of the NF45-NF90 complex in cancer cells, which may promote cancer cell proliferation. The IRIC’s team discovery suggests that these proteins could be new therapeutic targets against different types of cancer. 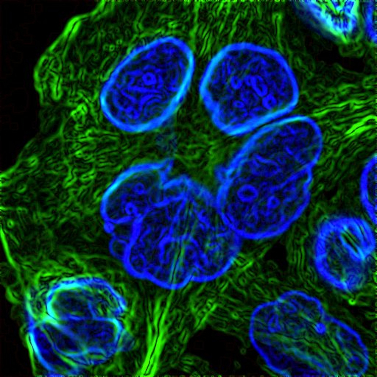