At the beginning of cell division, cells round-up through different mechanisms, notably the reorganization of their cortex. Among the proteins involved in this cell morphogenesis, there is the family of ERM proteins (ezrin, radixin and moesin). The team of Professor Sébastien Carréno, Director of the Cellular Mechanisms of Morphogenesis during Mitosis and Cell Motility Research Unit, wanted to identify the molecular cue activating these proteins at mitotic entry. Their work has shed light on a novel mechanism involving interphase microtubules in the regulation of cell rounding at mitotic onset. The project, led by PhD student Kévin Leguay, is the subject of a publication in the Journal of Cell Biology. The work is the result of a collaboration between Sébastien Carréno’s team and those of Michel Bouvier at IRIC and Jean-François Côté at IRCM.

Activation of ERM proteins by drugs that disassemble microtubules

Using biosensors developed by the Carréno and Bouvier laboratories at IRIC, the team tested 3,469 small molecules approved by the Food and Drug Administration (FDA) to measure their effect on ERM activation. Among the ERM-activating molecules identified, molecules causing microtubule disassembly are overrepresented. Through different experiments, the team found that treating human cells with these molecules promotes the phosphorylation and the open conformation of ERM proteins, leading to their activation.

The team form the Carréno lab then focused on the molecular mechanisms allowing the activation of ERMs through the disassembly of interphase microtubules. Their elegant characterization of the signaling pathways involved led to a new model : the activation of ERMs induced by the disassembly of microtubules depends on the proteins GEF-H1, RhoA and SLK. As interphase microtubules disassemble at mitotic onset, the GEF-H1 – RhoA – SLK – ERM signaling axis helps coordinate the reorganization of the cortex at this key moment of the cell cycle. The disassembly of microtubules thus acts as a molecular cue leading to cell rounding at the start of mitosis. The study provides a new understanding of the fundamental mechanisms that regulate cell division. 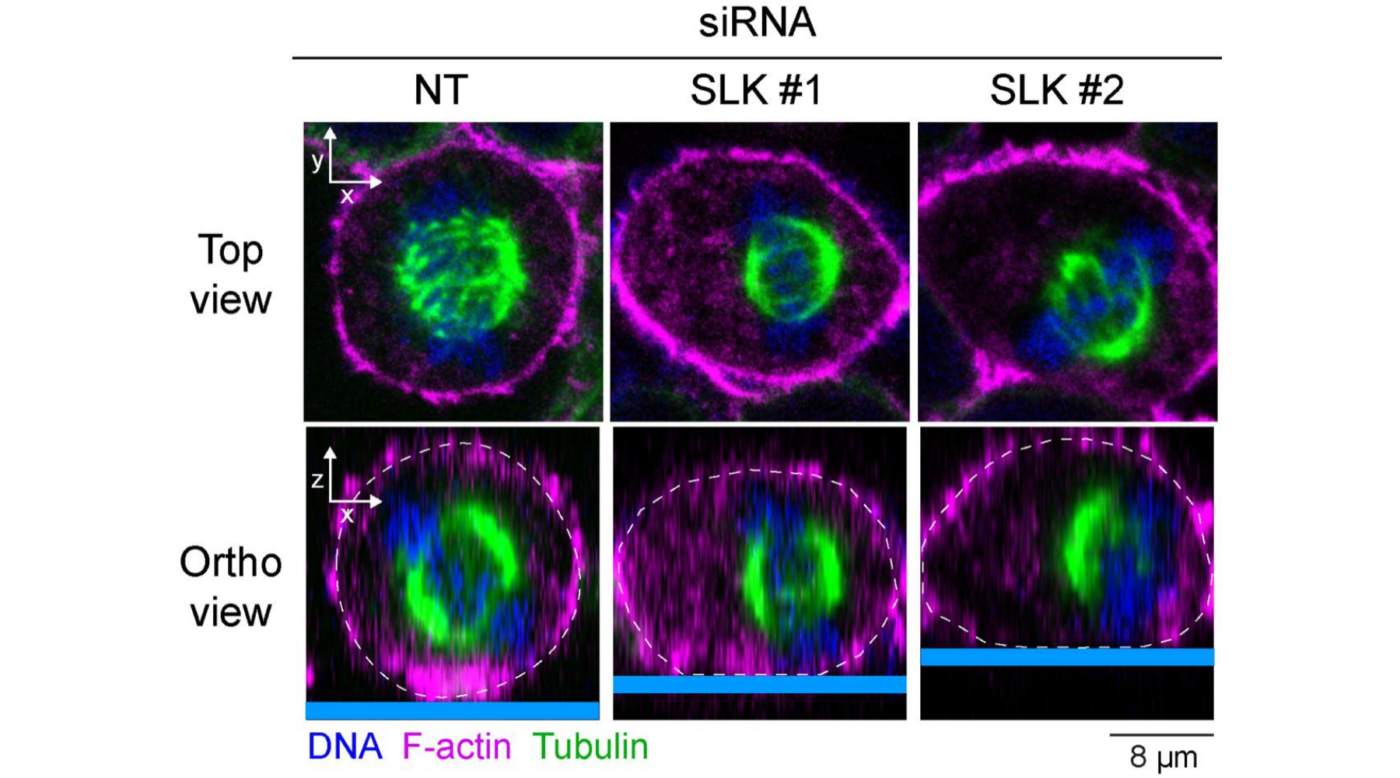