The team of Dr. Guy Sauvageau made an unprecedented breakthrough thanks to the discovery of a new molecule that expands stem cells from umbilical cord blood. The use of this molecule, designed and synthesized by the chemists of Dr. Anne Marinier’s team at IRIC, will significantly increase the availability of compatible cord blood for treating patients with illnesses like leukemia, lymphoma and myeloma. For many patients this therapy constitutes a treatment of last resort.

For these reasons, the public has voted this scientific breakthrough “2014 Québec Science Discovery of the Year.” 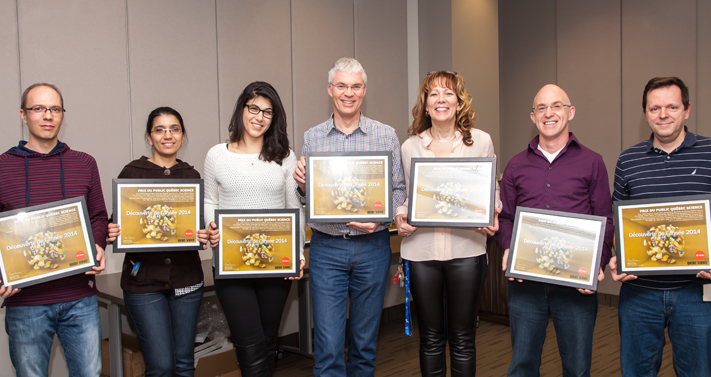 “Basic research is essential for the acquisition of new knowledge and in the innovation process,” states Raymond Lemieux, editor-in-chief of Québec Science. “The work of Dr. Guy Sauvageau and his team is a prime example of that, and our readers have clearly understood the impact that this discovery could have for the medicine of tomorrow. That is one of the reasons why they chose it as the 2014 Québec Science Discovery of the Year. It should be noted that this is the only scientific award that is awarded by the public. This year, over 3,500 persons took part in the voting, which is a record. In addition, the discovery selected for first place won 31 percent of the votes.”

On behalf of the members of the team that contributed to this discovery, Dr. Sauvageau, Principal Investigator at IRIC, Professor of the Université de Montréal’s Faculty of Medicine and Hematologist at Maisonneuve-Rosemont Hospital, thanked “the public for supporting this discovery – which, we hope, will be accessible very shortly to patients who need to receive a stem cell transplant. Our plan is to carry on working tirelessly so that human trials can begin as soon as possible.”

For the Rector of the Université de Montréal, Guy Breton, this recognition has a very special significance: “The team led by Dr. Sauvageau has achieved a breakthrough that will have a positive impact for many patients. Just knowing that thousands of citizens took the time to vote for this discovery is something we find heartwarming. Our researchers rarely have the chance to experience the direct appreciation of the public! I thank Québec Science for an initiative that brings us all closer together, and I congratulate the IRIC team once again for its remarkable accomplishment.”

“Our Institute is proud to be associated with this discovery,” adds IRIC Chief Executive Officer Michel Bouvier. “Our unique multidisciplinary approach, which combines basic high-level research with its clinical applications, is bearing fruit. This Québec Science award is also an appeal to young people to make a career in research, where they will find challenges to match their aspirations and where they will be able to make tangible contributions to our society as participants in the scientific discovery process.”

Scientific advances such as this one are the result of the collaborative efforts of multi-disciplinary teams involved in the research. Ph.D. student Iman Farès and research officer Jalila Chagraoui, with the help of the members of the Screening Core Facility directed by Jean Duchaine, developed the biological test, screened the IRIC library of compounds and identified the starting small molecule. Chemists Yves Gareau, Stéphane Gingras and Réjean Ruel of IRIC’s Medicinal Chemistry team, headed by Dr. Anne Marinier, then designed the molecule UM171 by optimization of the starting molecule and developed a practical synthesis for its production. The molecule was named UM171 in honor of the Université de Montréal and the work has been published in the prestigious journal Science. The Maisonneuve-Rosemont Hospital, Héma-Québec and the Drug Discovery and Research Commercialization unit (IRICoR) of IRIC were also invaluable collaborators in contributing to bring this discovery to fruition.