TMEM16F: a protein with a key role in the regulation of T cell activity

Understanding the regulation of T cell activity is crucial for the development of immunity against infections, but also in cancer. A study conducted by the team of Etienne Gagnon reveals that TMEM16F, a molecule that promotes the exchange of components between the lipid bilayer of a cell membrane, is involved in this activation. Recently published in Science Signaling, this work elucidates the cascade of events leading to robust T cell activation. This study increases the number of potential targets to improve the activation of the T cell-dependent immune response. Furthermore, it opens the door to strategies for anti-cancer therapy.

When pathogenic organisms enter the host, adaptive immunity is called upon through the activation of specialised cells called T cells, which are the conductors of the immune response. Antigen-presenting cells (APCs) present parts of the “intruder” elements to T cells at a specialised interface between these two cells called the immunological synapse, which allows the development of an immune response adapted to the intruder in question.

The initiation of the adaptive immune response involves the activation of the T-cell receptor, known as the TCR, a protein complex consisting of 8 proteins. Among these components, the CD3 proteins are responsible for ensuring TCR signaling, and thus, T cell activation. At rest, the TCR remains in a dormant state due to electrostatic interactions between the intracellular domains of the CD3 proteins, containing positive charges, and the plasma membrane of the T cell, the inner leaflet of which is rich in negatively charged lipids – mainly phosphatidylserine. When the TCR recognises an antigen presented by an APC, it forms aggregates and thus excludes phosphatidylserine, allowing the CD3 chains to dissociate from the plasma membrane to initiate signalling. However, phosphatidylserine can also be redistributed to the outer leaflet of the plasma membrane by special enzymes called scramblases. One scramblase that has gained attention in recent years for its involvement in T cell activation is the TMEM16F protein. However, its exact role in this process has remained unknown until now.

In this study, the authors demonstrated that the activation of TMEM16F by calcium initiates the redistribution of phosphatidylserine to the outer leaflet of the plasma membrane and leads to a decrease in electrostatic potential. This decrease is concomitant with the formation of the immunological synapse and furthermore leads to an increase in the dissociation of the cytoplasmic domains of the TCR-CD3 complex from the plasma membrane and amplifies the TCR-dependent signalling. As a result, T cell activation is also increased.

This study demonstrates the important role of TMEM16F in amplifying TCR activity-induced signalling and provides the first molecular basis for understanding this regulation. By modulating electrostatic interactions, TMEM16F regulates TCR activity and leads to robust T cell activation. Thus, the work of Etienne Gagnon’s team broadens the potential targets involved in the activation of the T cell-dependent immune response. In addition to better understanding this crucial regulation in the adaptive immune response, these discoveries offer the opportunity to develop immune strategies against cancer, particularly with respect to therapies employing chimeric antigen receptor technology, commonly called CARs.

T cells that form an immune synapse redistribute phosphatidylserine (PS) towards the outside of the cells to reduce its presence within the inner leaflet of the plasma membrane. This can be observed by a reduction of the fluorescence intensity of a PS-specific probe (green) in the membranes that are in contact with activating beads (magenta), called the immunological synapse. A reduction of PS at the synapse, enables the dissociation of bystander TCR-CD3 (cyan), which can be observed by an increase in the fluorescence signal at the plasma membrane in contact with the activating beads (magenta), caused by the reduction of energy transfer between the TCR-CD3 chain and its partner, a plasma membrane-targeted fluorescent protein (yellow). 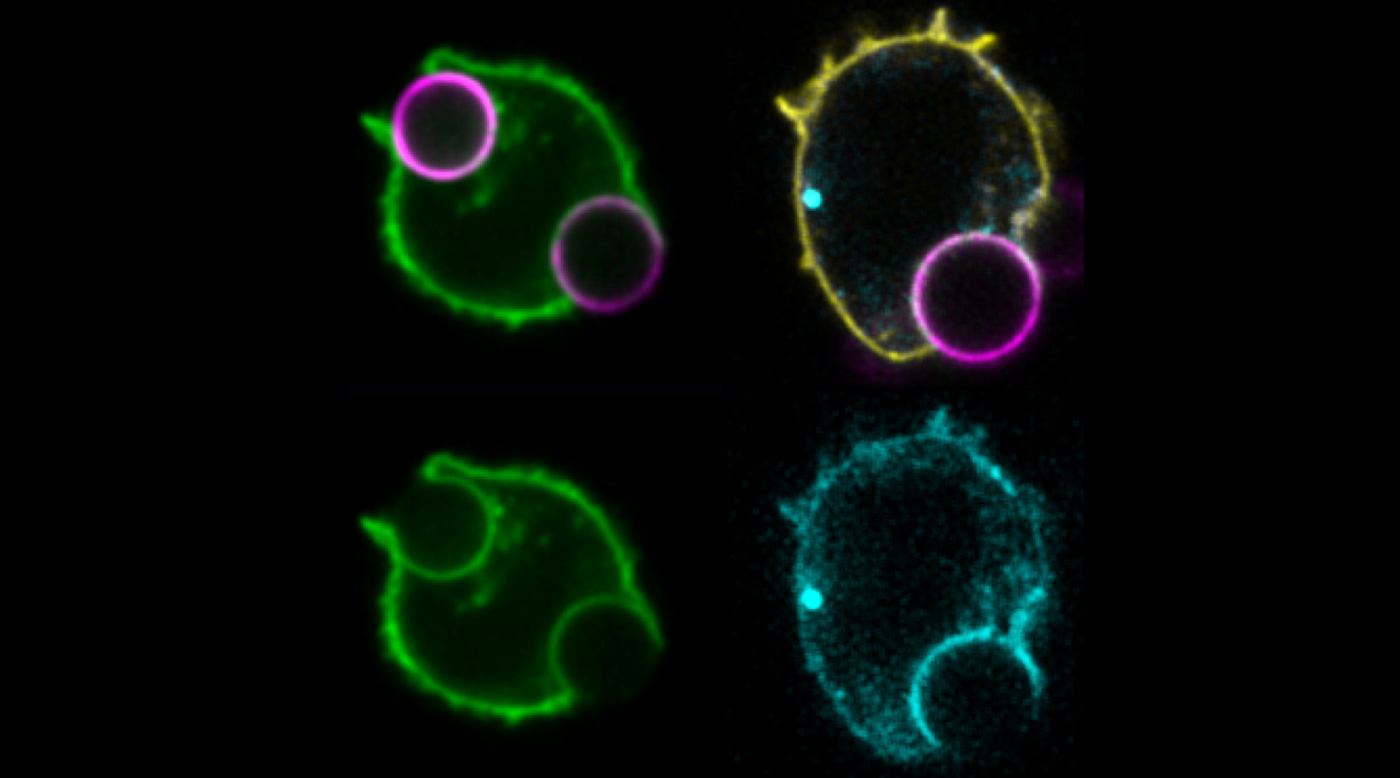