Enzymes that regulate cell division must be subjected to spatiotemporal control, allowing them to access the cellular structures they control only at the appropriate time. The segregation of chromosomes during mitosis is the most crucial event of cell division. Spatiotemporal coordination is therefore fundamental to the good progress of mitosis but it remains poorly understood. The team of Professor Vincent Archambault at IRIC recently discovered new mechanisms for the functioning of the molecular module formed by three proteins that control mitosis; Greatwall, Endos and PP2A-B55. The research was conducted by Myreille Larouche, PhD student in Biochemistry, with postdoctoral fellow David Kachaner and is the subject of an article published in April in the Journal of Cell Biology.

Cells in multicellular organisms multiply through mitotic cell division. Essential to various normal processes (development, healing, tissue regeneration), cell division can cause conditions such as cancer when it becomes chaotic. Mitosis requires important events within the cell to be finely coordinated in time and space to avoid any defect. For example, it is important that the genome of the cell be correctly duplicated before the chromosomes condense. Likewise, it is necessary for the nuclear envelope, a barrier that protects the genome, to disassemble before the separation of the pairs of chromosomes between the two nascent daughter cells begins.

Several regulatory enzymes, highly conserved between species, allow the orderly progression of mitosis. Some, called kinases, modify proteins by adding phosphate groups to them; this is the process of phosphorylation. This modification of proteins by phosphorylation can affect their structure, activity or location; which can greatly influence their function. Another type of enzymes, the phosphatases, oppose the action of kinases by removing phosphate groups (dephosphorylation). (See Figure 1)

The phosphatase PP2A-B55 must be inactivated at the start of mitosis for the various cellular transformations required for mitosis to take place properly, but its activity is required at the end of mitosis to allow cells to complete the final stages of their division. The proteins responsible for PP2A-B55 inhibition are the Greatwall kinase and the protein it phosphorylates: Endos.

Recent work from the Archambault lab has shed light on the hitherto unknown reason behind the change in location of Greatwall at the entrance to mitosis, when it suddenly passes from the nucleus to the cytoplasm before the nuclear envelope disassembles. Combining approaches from genetics, cell biology and biochemistry, the researchers used the fruit fly Drosophila melanogaster to show that Endos and PP2A-B55 perform their essential functions in the cytoplasm.

Their results also demonstrate that the active form of Greatwall must access the cytoplasm in order to efficiently phosphorylate Endos and induce its interaction with PP2A-B55, thereby allowing the inhibition of the phosphatase. The researchers found that the loss of function of Endos in the cytoplasm, but not in the nucleus, causes serious defects that compromise the course of mitosis. In addition, these defects are due to increased activity of PP2A-B55 in the absence of Endos in the cytoplasm.

The precise temporal regulation of the locations of Greatwall, Endos and PP2A-B55 is therefore essential to ensure that the phosphatase PP2A-B55 is active in interphase, but completely inhibited at the start of mitosis. This dynamic is crucial to prevent PP2A-B55 from too hastily dephosphorylating mitotic proteins in the nucleus when these become exposed to the cytoplasm following nuclear envelope breakdown. These mechanisms, characterized in Drosophila, appear to be conserved in humans. (See Figure 2)

In short, this work sheds new light on the spatiotemporal coordination of the molecular machinery that controls mitosis, an aspect of the cell division cycle that is still not fully understood. 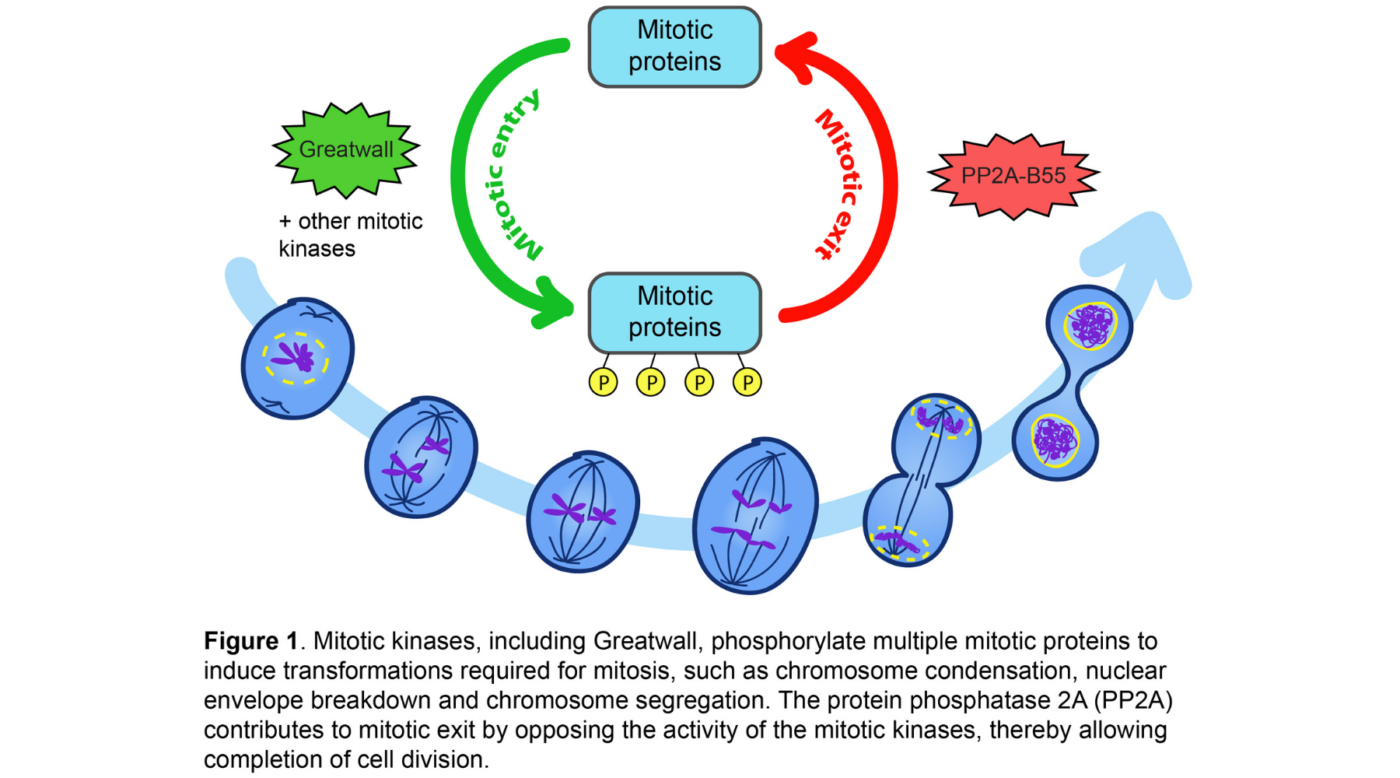 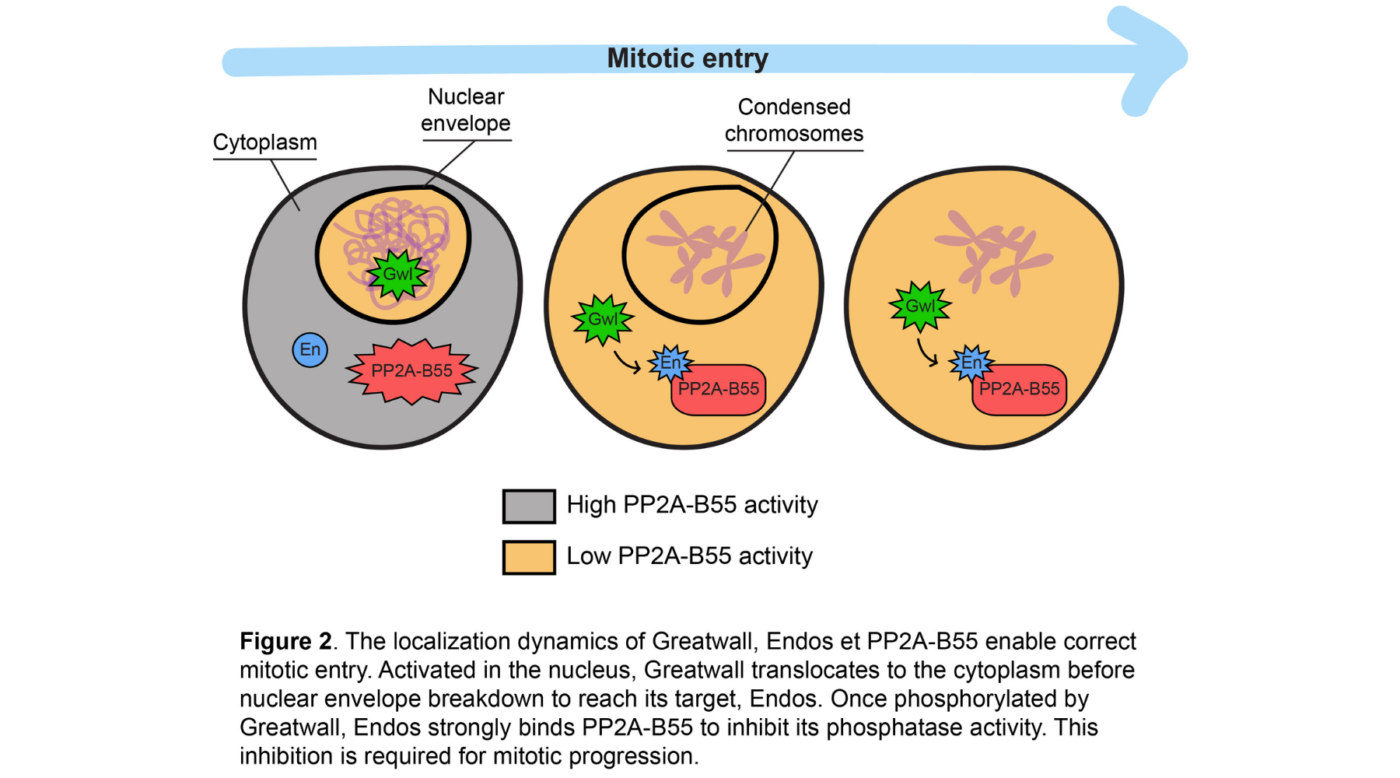 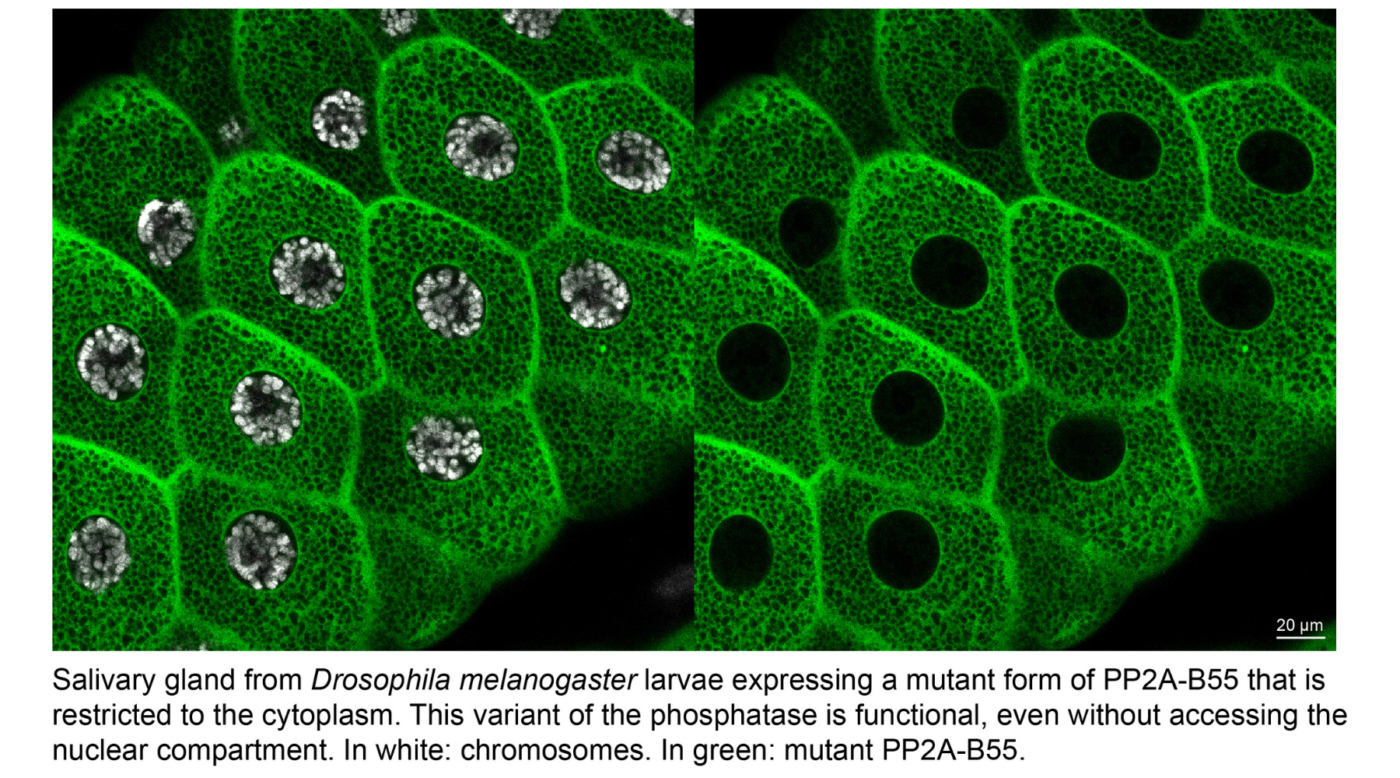